skip to main | skip to sidebar

Thanks again to Annalisa Derr, our Lucila 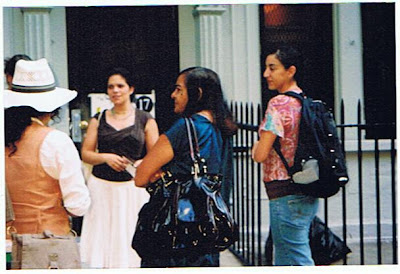 Annalisa in group is second from left; Annalisa below is second to none.

Here's what Annalisa tells us about playing the role of Lucila:
As a non-native Spanish speaker, this is the second time I've played a Spanish speaking character. However, playing Lucila brought a handful of challenges aside from language. One of which was bringing to life the non-fictional character of a young Gabriel Mistral. I had to discover the truth, complexity, and freedom of this young woman without playing at being a 'little girl.'
One of the many fun things about being an actor is the process of discovery and growth that happens with each new play and character we inhabit. I had the fortune to learn about a talented and mysterious poet while recreating her through my own eyes.
There are universal human truths that we can all draw on to, "step into the shoes" of the character, or empathize with them. These truths I drew from while molding the character of Lucila. And sometimes, as actors, we ask for guidance and permission from that of the deceased soul of the character we are portraying in order to create a well-rounded portrayal." [That's Gabriela Mistral on the left —Lucila grown up. She's smiling because someone worked hard to tell the story of what happened to her in Vicuña, Chile, when she was a child. Lucila's story.]
We're glad to know that Annalisa has been up to a lot of things since the 2008 New York International Fringe Theatre Festival.

I just wrapped a web series entitled "Empire," in which I played Katherine. Nearly completed filming the feature-length film, "Mara."
I am always creating; whether I am acting, writing, singing, dancing, painting, taking photographs with my Polaroid, I am "doing." I just returned from a three-week trip to Poland in which, among many things, I was able to perform my rendition of "My Funny Valentine."

But we're back to the top where we who thank her for doing such a great job. Wish we could see her Funny Valentine.